TURISAS has officially started recording their upcoming 4th album. The band is currently working with drums at Atomic Spa studio in Helsinki, Finland, and will continue the recordings in different locations until the end of January. The upcoming album is to be released by Century Media Records in May 2013.

At the same time, the band is also announcing a change in the line-up. The original drummer, Tuomas “Tude” Lehtonen, is stepping aside from the podium after playing with the band from the very beginning. Lehtonen explains the reasons behind his decision:

“Writing this message is very difficult for me. I can’t tell you how hard it feels to step away from the path we’ve been walking together for the last 15 years, and to start a new era in my life without the band.

There are many reasons for me to quit the band. The stress from the years spent on the road and our different artistic visions have lead to a mutual decision for me to step back and hand over the drumsticks for the next guy. In any case, it has been a great experience and all the memories from along the road are something that I will always cherish.

The biggest thanks go to all the past and present members of the band, not to forget all the technicians and fellow drummers I’ve met in concerts and on tour – and, of course, especially to all the fans that have allowed us to grow to the level that Turisas is at today.

I wish success and good luck to all my bandmates and feel that I will never be straying too far away from the band. I shall always be proudly carrying the Heart of Turisas wherever I go. The man can leave the band but the band will never really leave the man. Battle Metal!”

Along with Lehtonen, also the touring bass player Jukka-Pekka Miettinen will be parting ways with the band, needing to focus on his own musical projects. With both former band members, the relationship remains warm and amicable.

Nevertheless, the machine is not stopping here. We are proudly welcoming the newest members of the band: the new drummer, Jaakko Jakku, has already started recording his drum parts for the new album. The bass duties will be taken care by Jesper Anastasiadis. They are both excellent musicians and great personalities, and the rest of the band is enthusiastically looking forward to the shows together.

After finishing recording the album at the end of January, Turisas will spend the spring on road. The rest of the year 2013 is shaping up to be very busy filled with festivals and tours.

TURISAS are also happy to announce a brilliant way to end a brilliant year: the band will play a New Year’s Eve special show in Helsinki, Finland. This is the only show in the capital city in 2012 and at the same time a kickstart to a very busy year 2013.

It will also serve as a memorable show to all the fans, as it will be the last one by the current line-up. No need to cry, we shall go out with a bang!

The tickets to the Nosturi club show will go on sale on 21 November (all ages show) at http://www.tiketti.fi

We just announced the US tour in Feb/March 2013 with Firewind and Stolen Babies. 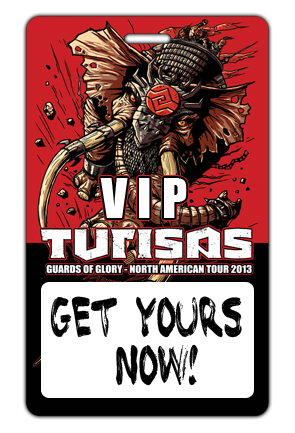 On this tour, we’re also offering a strictly limited number of VIP Meet & Greet packages for all the shows. We had absolutely great time in the US last spring and we certainly hope to see you guys again!

Get your VIP passes at http://turisas.myshopify.com/

Edit: We’re also offering a strictly limited number of VIP Meet & Greet passes for all the shows in North America. More info about the passes at http://turisas.myshopify.com/

Battle metallers TURISAS will be returning to North America in February/March 2013 for a headlining tour featuring FIREWIND and STOLEN BABIES as special guests!

In regards to the trek, the band comments:

“Back to America straight out of the studio! We’ve spent the last six months off the road writing some new killer tunes and are just about to start recording them as we speak. The great memories from our previous tour last spring is making us even more excited to hit the road again after this long break. We’re coming up with new cool and crazy ideas for this tour, and who knows, maybe we’ll even try out and premiere some completely unreleased new material. One thing is certain, after 9 months off the road there’ll be some serious energy to be released on stage! Serve us your weakest piss-light beer! We’ll take it! America here we come!”

Hailing from Finland, TURISAS is currently finishing work on their latest studio album, which they are looking to release in summer 2013. See below for a list of tour dates (with more to be announced soon!):

*=TURISAS and FIREWIND only

A special VIP Meet & Greet package is available for all the shows. For full details, please see http://turisas.myshopify.com/

Fans can also see TURISAS before their “Guards of Glory – North American Tour 2013” on the heavy metal cruise, 70 000 Tons Of Metal, which kicks off on January 28th in Florida. For more information about 70,000 Tons Of Metal, please visit: http://70000tons.com

In addition to previewing material from their upcoming release, TURISAS will be touring in support of their latest release, Stand Up And Fight, which is available for purchase at CM Distro here and at iTunes here.

Read on for a few reviews of TURISAS and Stand Up And Fight:

“[TURISAS] play rampaging anthems that angry up the blood and their ardent fans, like their heroes, aptly turn up to shows wielding axes and baring skin ready for the fight.” — THE NEW REVIEW.net

“TURISAS plays a rousing brand of pagan, folk and symphonic metal that’s melodic and catchy, and also has a lot of atmosphere.” — HEAVY METAL.ABOUT.com

“Full of chants, symphonic elements, narrations, and tales of lore and war, [TURISAS’] newest album, ‘Stand Up And Fight,’ is the soundtrack to a glorious battle.” — HEAVY BLOG IS HEAVY.com

Press opportunities for TURISAS are available, so please contact nikki.law@centurymedia.com to schedule!

Want to learn Finnish? Listen to Nygård’s brand new interview that was broadcast on Radio City channel yesterday. Word of the season: “kaamos”. 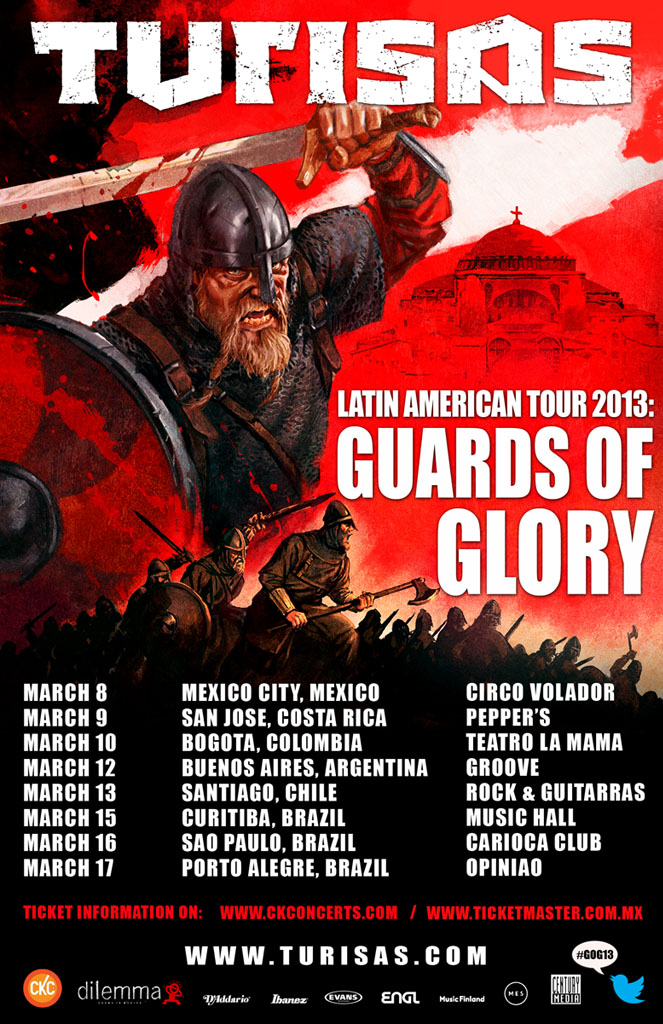